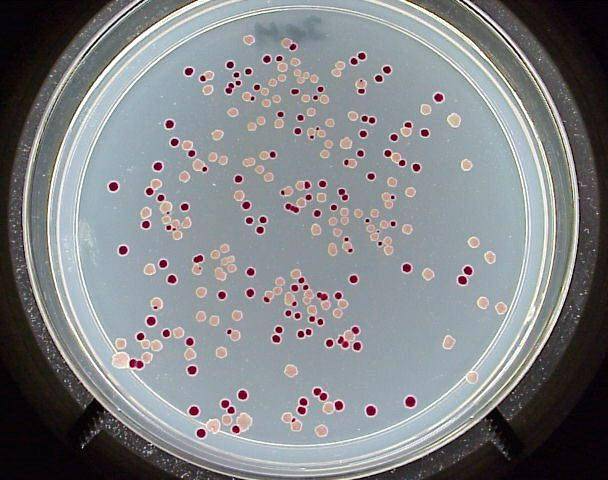 With the invasion of Ukraine, however, it’s not a day to celebrate.

The LTEE will move to the capable lab and hands of Jeff Barrick this Spring, after all 12 lines have reached 75,000 generations.

Over the decades, several lines fell behind others due to cross-contamination (or concerns about the possibility), which we detected by examining the alternating Arabinose marker and seeing the resulting colony colors on TA plates. Those lines were then restarted from whole-population samples, but they would be 500 generations behind the others (or a multiple of 500 generations behind in some cases).

The picture above shows red and white colonies growing on TA agar in a Petri dish. The red colonies cannot grow on the sugar arabinose that is part of the TA medium, while the white ones can use arabinose. Half of the LTEE lines started from red colonies (Ara–1 to Ara–6), and half started from white colonies (Ara+1 to Ara+6). We alternate the red and white lines each day during their propagation. That way, if cross-contamination occurs, we can detect it by the presence of bacteria that make colonies that are the wrong color. We check colonies before every periodic freeze of the LTEE. These days, with DNA sequencing, we can also use derived mutations that are unique to each lineage to check whether a putative contamination event is real or not. (Indeed, in some populations, especially those that evolved hypermutability, the colony markers don’t work like they did when the LTEE started.) If we confirm that a cross-contamination event has occurred, we restart the affected population from the last frozen sample of that population.

So today, Devin Lake will propagate the last two lagging populations. Our lab will continue to propagate them until they, too, reach 75,000 generations. The last one should reach that goal in late May.