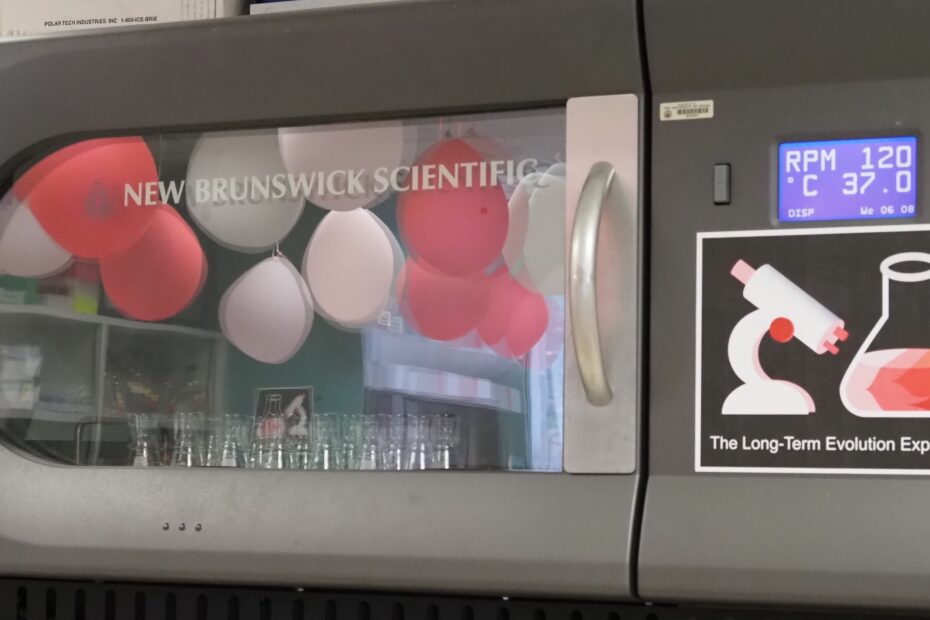 Today we revived frozen samples of the 12 LTEE populations in the Barrick lab at the University of Texas at Austin to continue the Long-Term Evolution Experiment.

It was an occasion that called for some decorations! The colors of the balloons and streamers draw from the red, pink, and white of the colonies that E. coli from the LTEE form when plated on TA agar, which is one way that we monitor their evolution.

Over the past several months Devin Lake and others in Richard Lenski’s lab at Michigan State University brought the last few “straggler” populations that had fallen behind for various reasons all up to 75,000 generations so they would be in sync for the handoff. Then, the E. coli were shipped to Texas and spent a few weeks in cryopreservation while we double-checked our supplies, procedures, and equipment. Once the LTEE starts, it needs attention daily.

We did a test run of reviving the LTEE populations last week, including plating them on various media on which they form colonies with different colors and morphologies. Everything checked out as expected.

On June 21st, it was time for reviving cultures that we will continue propagating in the days to come as the official LTEE populations. All the steps went smoothly: from taking the cultures out of the freezer, to inoculating them into media in flasks, to placing them carefully in the incubator. (Even with the added pressure of some cameras in the background documenting things.)

The first entry in LTEE Notebook #13 in the Barrick lab draws from a classic American novel that’s one of my favorites. It’s a quote (of a quote) from Moby Dick that, like much of the book, can be read as being about more than whales, perhaps even the LTEE. That the passage is in a prologue section titled “Extracts. (Supplied by a Sub-Sub-Librarian)” also seems somehow fitting for continuing this (hopefully) never-ending experiment.

We’ll be doing some additional plating and genetic checks over the next few weeks in addition to training new researchers in my lab to do the LTEE transfers. I bet the E. coli won’t even notice that they aren’t in Michigan anymore.